Cacti, usually more at home in the desert, are increasingly ending up in pots in UK homes, with sales up 63 per cent since January, according to Dobbies, the garden centre. Many people find them a very aesthetic addition to their windowsills as home and cacti are becoming rather luxurious looking plants. Better yet, they are also available on online garden centres like Gardeners Dream and can be delivered straight to your door! 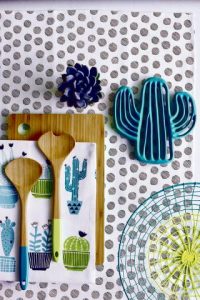 The sudden rise in popularity is down to the spiny succulent being adopted by high-fashion names. Paul Smith is selling a £4,400 multicoloured cactus coat stand, which he created for the design company Gufram, while Victoria Beckham’s latest aviator sunglasses feature cactus-green coloured lenses. A “cacti boutique” has opened in Dalston, east London. The shop is called Prick, and to spare you the embarrassment of asking for directions it can be found at 492 Kingsland Road, E8.

There are several ways in which to incorporate cacti into your home decor. One is to opt for a group of smaller varieties and house them in geometric-patterned or metallic-coloured pots, or you can plant several of differing sizes in a bowl, with the tallest at the back and softer textures at the front. Alternatively, plant one giant cactus in a pot and leave it on its own, in all its spiky glory. “For something a bit different, try putting them in hanging pots or terrariums, or in recycled things you have around the house, such as jars,” says Scott Provan, a plant buyer at Dobbies. 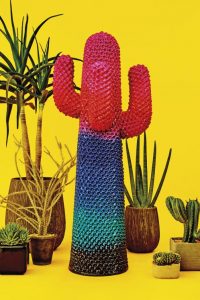 Watering a desert-dwelling plant can be tricky. The knack is to replicate what happens in its natural habitat, where it pours heavily for a day or two, then doesn’t rain for many days, or months.

Cacti are also influencing paint shades, wallpaper and accessories. Cactus is one of 28 house colours offered by Neptune, a company that sells customised kitchens and furniture, with this smoky green appearing on its units and chairs.

The designer Ben de Lisi has introduced cactus themes for this year’s spring/summer collection for Debenhams, which will be appearing in shops in the coming weeks. His dishes, tea towels, trays and chopping boards feature succulents. “From my many trips to Chile, I am always thrilled to see the most beautiful and majestic cacti,” he says. “Each one seems to have a personality and shade of green of its own. I introduced the cactus image into my homeware range because it brings to mind open spaces, sunshine and the most diverse landscapes — the perfect motif to inject a sense of summer into the home.” 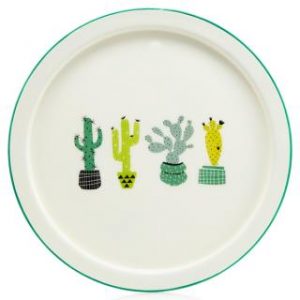 Oliver Bonas has incorporated the cactus print on glasses and wall art.

If you want to have fun with cacti in a child’s bedroom, try Kids Cactus Wallpaper Mural from Murals Wallpaper, £25 a square metre.

Or buy cactus vinyl stickers for the wall from Inkmill Vinyl, £12.60 for a sheet of 24 cacti. This way you can get all the style of the cactus without the spikes.