Wolfgang Suschitzky believed that the craft of pointing a camera lay in “a combination of the right choice of detail, the elimination of all that is inessential and the right moment”. It was an aesthetic approach that he brought to his stills photography and to his work as a cameraman on films such as Entertaining Mr Sloane and Get Carter, Mike Hodges’s gritty thriller set in Tyneside, starring Michael Caine as a hitman in search of vengeance.

By the time he worked on Get Carter, Suschitzky was in his sixtieth year with a storied career behind him that had begun before the Second World War, when he took an iconic series of photographs documenting London street life. Adhering to the maxim “every picture tells a story”, his shots of 1930s Britain, featuring workers laying paving stones, men browsing second-hand bookshops in Charing Cross Road, shoeblacks, knife-grinders, milkmen, seedy characters in pinball arcades and couples taking tea at a Lyons Corner House, were expressive and evocative, period essays that resembled frames from a black-and-white newsreel.

For his 100th birthday in 2012, several of his photographs were exhibited at Tate Britain alongside the work of Henri Cartier-Bresson, Robert Frank and others as part of Another London: International Photographers Capture City Life 1930-80. That year he also received a special Bafta award for his cinematography, emphasising how both facets of his work were expressions of what his son Peter Suschitzky, the director of photography on Star Wars: Episode V, called the same “patient and discreetly watchful eye”. 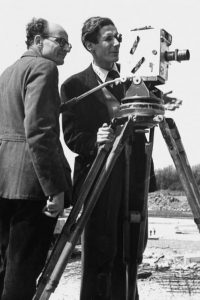 Self-effacing and modest, but with a determined spirit, Suschitzky Sr insisted that he was a mere observer and his own description of his technique eschewed any claim to high art. “I was always quite content to be a good craftsman,” he said.

Many of his most memorable photographic subjects were ordinary folk going about their everyday business, although he took portraits of the great and the good, too, including such eminent Victorians as HG Wells and Sir Alexander Fleming. Yet he wasn’t one to gossip about his famous sitters. “I had the good luck to meet interesting people in my job. But you just shook hands and disappeared behind your camera,” he observed with characteristic humility.

When asked to nominate his favourite photograph in a professional career lasting more than a half a century, he opted not for a human image at all, but for a shot of Guy the Gorilla, taken at London zoo in 1958. “This marvellous ape was living in a tiny cage,” he said. “People threw him sweets, but I don’t think he was happy. I don’t see how he could have been. The almost human expression is perhaps disturbing.”

Even when taking pictures of animals it was as though he was trying to tell a story. His childhood ambition had been to become a zoologist, and he was particularly delighted when asked to supply the photographs for The Kingdom of the Beasts, a book by the evolutionary biologist Julian Huxley. His move from photographer to film cameraman was a natural transition and he began working in the 1940s with Paul Rotha, the pioneering documentary film-maker. Rotha came to rely heavily on Suschitzky’s photographic expertise in making “films that were useful to society” for the Ministry of Information during the Second World War. “We made films about steelworks,” Suschitzky recalled. “We went into factories that other people never get any knowledge of — like how plastics are made. We did a monthly magazine about ‘workers on the war front’. We saw women making shells for guns, women using lathes. I remember working in Scotland on how they made barrage balloons.” Later, in the world of postwar reconstruction, he documented the birth of the National Health Service.

By the 1960s he was working as a camera man on a wide variety of feature films and it was his cinematography on a little-remembered 1963 film, The Small World of Sammy Lee, directed by Ken Hughes, which led to his most celebrated contribution to cinema history. While preparing to film Get Carter, Hodges and Caine were casting around for ways to produce a more gritty and realistic portrayal of on-screen violence than had previously been seen in British cinema. Suschitzky’s camera work on Hughes’s film, set in the seedy underworld of violent London debt-collectors, presented itself as the closest precedent. “I remembered it as being very experimental in its use of the hand-held camera and thought ‘this is the director of photography for me’,” Hodges noted.

Suschitzky proved to be an inspired choice, shooting the film in a Newcastle that was “grimy, poor and flattened spiritually”, using long lenses in close-quartered locations, creating an almost documentary effect as Caine stalked his prey through crowded pubs and mean streets. The film won no awards at the time, but was subsequently cited by Quentin Tarantino and Guy Ritchie as a seminal influence, and in 1999 Get Carter was ranked 16th by the BFI in its list of the Top 100 British films of the 20th century. Its reputation continued to grow and in 2004 a survey of British film critics in Total Film magazine selected it as the greatest British film of all time.

The acuity of Suschitzky’s early photography on the streets of London was informed by the sharp eye of an immigrant in an unfamiliar landscape and his shock at the poverty of Depression-era Britain.

He was born in Vienna in 1912, at a time when Freud, Wittgenstein, Schoenberg, Klimt and others were making the city the intellectual capital of Europe. His father Wilhelm and mother Adele were free-thinking former-Jewish atheists, who owned Vienna’s first socialist bookshop. He recalled the family excitement that greeted the Russian revolution in 1917 and growing up with his parents’ radical circle, “very much ahead of their time”.

He shared a bedroom above the bookshop with his sister Edith, four years older than him, and cited her as “a great influence” on his life. It was she who took up photography first, studying at the Bauhaus, while he graduated from the Vienna School of Design and Graphic Arts. However, by the time he reached the age of majority, Austria had lurched from social democracy to fascism, and it was a dangerous time to be left-wing and Jewish.

Matters came to a head when Edith was arrested as a suspected Soviet spy as she was leaving a known drop-point for the Austrian communist party. When their home was searched, a mimeograph machine used for duplicating communist pamphlets, and a translation-in-progress of a biography of Lenin, were found. She hastily married Alex Tudor-Hart, a British doctor and friend of Kim Philby, a marriage of convenience that enabled her to flee to London, where she was soon joined by her brother who sought asylum. “Red Vienna had disappeared,” Suschitzky recalled. “Parliament was dissolved, trade unionists were imprisoned. So I thought there is no future for me in Austria.” 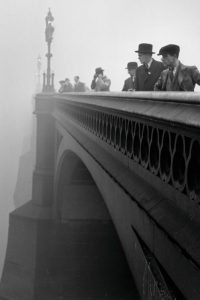 One of Suschitzky’s photographs of 1930s London, taken from Waterloo Bridge

After marrying Puck Voûte, his Dutch girlfriend, in 1934 Suschitzky moved to the Netherlands, where they ran a photographic studio manufacturing picture postcards. A year later she left him for another man, a desertion that he came to regard as “great luck because had I stayed there, I wouldn’t be alive”. He returned to England, where he received the shattering news that his father had committed suicide in Vienna. He and his sister eventually managed to secure their mother’s safe passage to England, but other relatives were less fortunate and his father’s brother died in Auschwitz.

In 1939 Suschitzky married Ilona Donath, with whom he had three children: Peter Suschitzky, the cinematographer; Misha Donat, the classical music writer; and Julia Donat, all of whom survive him. When the marriage was dissolved he wed for a third time to Beatrice Cunningham, who died in 1989.

In the 1990s KGB documents confirmed what British intelligence agencies had long suspected, that Edith had been a spy for the Soviet Union and had probably helped to recruit Philby, whom she met in Vienna in 1934. Although she had been under surveillance and was interrogated, MI5 was never able to confirm their suspicions during her lifetime, despite Anthony Blunt, the “fourth man”, describing her in his 1964 confession as “the grandmother of us all”.

She died in 1973 and Suschitzky insisted that she had never involved him in her espionage. “My sister was always more left-wing,” he said. “I never had any sympathy with communists, who said the party is above everything else, and if they say you should jump out the window, you jump. I didn’t understand that a political party would have such rights over you. I thought, a party is there to help people get a better life.”

Suschitzky, who lived in Maida Vale, west London, for more than half a century, retired in 1987, but his work — particularly his striking black-and-white portraits of 1930s London life — continued to be exhibited and published. “I call myself a lucky man,” he said. “I’ve had two or three exhibitions called Lucky Man: Wolf Suschitzky. And I was lucky. Very lucky.”