RECENTLY I WAS rewatching An Affair to Remember – the 1957 Deborah Kerr and Cary Grant pas de deux that I prefer to call A Day Dress to Remember – in which Kerr cracks out a series of sublime candy-floss creations as they sail across the Atlantic and into each other’s hearts.

Those frocks are impossibly gorgeous in all their pastel chiffon floatiness. When I first saw the film decades ago I remember thinking they were also impossibly old-fashioned. I mean, who would wear a day dress any more? At the moment the answer is: lots of people, including me.

The return of the day dress has been one of the surprises thrown up by fashion in the past couple of years, be it Balenciaga’s florals or Gucci’s everythings. Then there are Bottega Veneta’s Forties-ish plains, Prada’s new-gen flapper girls, Louis Vuitton’s future-facing silken slivers, Valentino’s, er, pre-Raphaelite medievalists. I could go on. That’s one of the things that I love about fashion – that some of the rises and falls are predictable, but some simply aren’t. 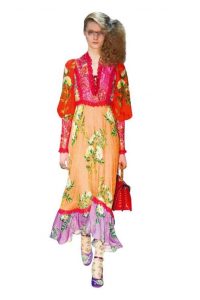 How did it all (re)start? According to the influential trend predictor Li Edelkoort – one of fashion’s most brilliant seers – it began with “young girls raiding their grandmothers’ wardrobes for dresses. They were looking for single pieces rather than separates, and there was nothing out there for them to buy.”

Cue Demna Gvasalia, the head designer of Vetements (and latterly also the artistic director of Balenciaga). It was the Georgian wunderkind who first spotted the gap in the market. “He understands what people need right now,” is how Edelkoort puts it. Gvasalia conjured up capacious floral affairs that might at first have been mistaken for sofa covers by the less acute observer, but have become one of the hottest, and most copied, phenomena of recent years. “So many women have told me, ‘Oh, there are three people in my office with that dress,’” Gvasalia told me recently.

That the day dress should have become a thing at one and the same time as, say, the luxe tracksuit may seem nonsensical. However, there is definitely method in the madness. They offer a kind of simplicity, a head-to-toe solution to the problem of what to put on of a morning. Those Vetements frock-wearing girls look nonchalant, as easy and breezy as those unpredictably swoopy hemlines of theirs.

Yes, that’s right, a dress can make life easier. The super-stylist Elizabeth Saltzman – an American based in London – once expressed her incomprehension as to why British women eschewed dresses. “Separates are so complicated,” she exclaimed. Her own wardrobe, she told me, held “dresses, dresses, dresses!” However, not only have Brits now officially got with the programme, we are the programme. London-based designers such as Preen, Erdem, Roksanda, Emilia Wickstead and Duro Oluwo produce some of the most beautiful day dresses in the business. Look to Preen for a mix of the edgy and the feminine, to Erdem for alluringly 21st-century historicism, to Roksanda for the best riffs on colour in the business, to Emilia Wickstead for a step-perfect take on lady-contemporary and to Duro Olowu for classy carnivals of clash-matched prints.

What day wouldn’t seem brighter if one navigated it in, say, Roksanda’s long-sleeved sliver of scarlet satin, or in Erdem’s belted Prince-of-Wales check with floral overlay (£1,795 and £1,120 respectively; from their London boutiques)? Or how about Emilia Wickstead’s splash of emerald chiffon (£1,550; from the London boutique)? Or Duro Olowu’s blue, yellow and black check-and-floral patchwork (£1,780; matchesfashion.com)? Or Preen’s Arabella red and yellow on black ruffled floral (coming later this month, £1,150; preenbythorntonbregazzi.com)?

If dresses such as these can pass muster just as well after dark, well, that’s rather the point. Who has the time to get changed for the evening these days – or indeed the inclination? A great dress is not only a one-stop solution, it is also a 9am-to-9pm one. The better the dress, the more likely it is to power you through a great (for which read, long) evening. My best frocks are very much 9am-to-2am affairs.

There are countless more below-the-radar British brands specialising in frocks that rock at slightly lower prices. When it comes to prints I love Saloni for its flattering lines and pretty patchwork combinations and Eponine London for its bravura transformation of ethnic fabric into uptown garb. The former’s blue and yellow v-necked floral (£550; salonilondon.com) and the latter’s red Thai tribal trim (£535; eponinelondon.com) are on my wish list.

Another standout dress label is Anna Mason. The British designer makes to order a range of day dresses, many of which I suspect would have met with the approval of Kerr herself. I could happily go to the ball, or indeed the office, in the red cotton broderie anglaise Christy or the blue wool crepe Electra (both £580; annamasonlondon.com). All that’s missing is Cary Grant.