Vincent van Gogh once wrote that “we cannot speak other than by our paintings” and a new film, which was painted by hand, has attempted to give voice to his work.

Loving Vincent, the world’s first all-painted feature length film, took seven years to make and consists of 65,000 frames painted by 125 oil painters from around the world.

The Irish actors Saoirse Ronan, Chris O’Dowd and Aidan Turner are among the cast in the ground-breaking production about the final months of the Dutch impressionist’s life.

The actors worked on sets constructed to look like Van Gogh paintings and against green screens, along with computer generated animation, which helped bring the paintings alive. Each played a character who featured in Van Gogh’s life and was painted by him.

Ronan, who has twice been nominated for an Oscar, plays Marguerite Gachet, who was painted twice by Van Gogh without her father’s persmission. O’Dowd takes on the role of the postman Joseph Roulin.

Turner, the Poldark star, plays the boatman from the Rowing Boats on the Banks of the Oise painting. Robert Gulaczyk, the theatre actor, stars as Van Gogh in what is his first film role.

Set a year after Van Gogh’s apparent suicide, Roulin, sends his son Armand (Douglas Booth) to deliver one of Van Gogh’s final letters. Armand then takes it upon himself to start investigating the painter’s death, interviewing the subjects of his final works. 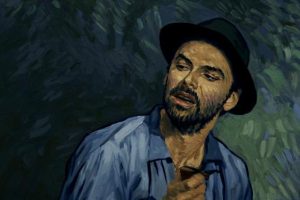 Ronan said that the chance to act within one of Van Gogh’s paintings was the main appeal for her in joining the cast.

“It’s lovely to learn more about him as a character, apart from Starry Night, we don’t know tonnes of stuff about him,” she said. “I knew that the concept of this film was new and that’s why I wanted to be part of it, what it would be like to be painted in all these Van Gogh paintings.”

O’Dowd said that he knew little about the painter before taking part in the joint UK and Polish project. “I feel like I know even less now,” he said.

“I knew some of his paintings; I knew that he was a troubled soul, a little bit about his time in Brixton after seeing a play about this at London’s National Theatre.

“I saw a little bit of the footage and I thought, ‘I’ve never seen something like this before’, so I’ve found it all terribly interesting.” 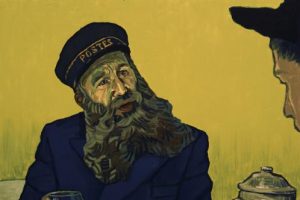 O’Dowd’s character was one of Van Gogh’s closest friends and drinking companion, with the artist painting six portraits of him during his lifetime. The actor said that bringing the painting to life for the film was a strange experience for him.

“If you’re in the middle of it, you don’t necessarily feel like you are doing it,” he said.

Dorota Kobiela, the Polish writer and co-director of Loving Vincent, said she had been trying to make the film for a number of years.

“I was 30 when I came up with the idea to do Loving Vincent, the same age that Vincent was when he started painting,” she said.

Kobiela decided to focus on the final people who would have had contact with Van Gogh before his death in July 1890.

“The script is set in his final days and I loved that his final paintings were paintings of the people he had regular contact with in the end: the mercurial Dr Gachet, his mysterious daughter, Marguerite, painted three times, yet her face was always concealed.”