It was a star of the summer’s National Gallery blockbuster. As visitors entered the Michelangelo & Sebastiano exhibition, they found themselves standing in front of the Taddei Tondo. Hewn from glittering white marble, it drew our eyes like the moon. This is the only sculpture by Michelangelo to belong to a British collection. It depicts the Virgin and Child and the infant St John.

The relief is unfinished. It has been left pock-marked by the chisel. You can imagine its creator has merely stepped back for a moment to look, wipe the sweat from his palms and ease muscle cramps. Yet, although it has been part of the collection of the Royal Academy for nearly two centuries, relatively few visited that second-floor corridor where, shielded by bulletproof glass, it has been on free display for more than 25 years. 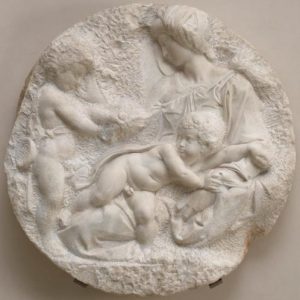 Michelangelo’s The Virgin and Child with the Infant Saint John the Baptist (the Taddei Tondo), 1504-5

Its appearance in the last National Gallery exhibition, newly liberated from its casing of faintly green-tinted glass, was a revelation for many, but don’t worry if you didn’t get round to going, because you are being given a second chance to look. While redevelopment of the Royal Academy galleries continues, the Taddei Tondo — named after Taddeo Taddei, the Florentine patron who commissioned it, and its rotondo (round) shape — is remaining at the National Gallery. And curators are making the most of this opportunity to set it at the heart of a small but stunning new display.

Drawing together seven of the greatest treasures of the permanent collection and hanging them alongside the Taddei Tondo, the gallery offers what amounts to a little art history lesson on that most famous of eras, the Italian High Renaissance, using original masterpieces for its illustrations. Leonardo, Michelangelo and Raphael, Around 1500 calls a meeting of three cultural giants.

One single loan, the Taddei Tondo, ties the iconic group together, revealing how the three masters were influenced by one another, yet at the same time developed ideas in their distinct ways. The exhibition starts with Leonardo’s Virgin of the Rocks, the central panel of an altarpiece painted in Florence over the course of the 1490s, and his Burlington House Cartoon of 1499. The former presents the Virgin and Child and St John amid a dramatic setting of primordial rocks. Nature and humanity meet in an image that integrates Leonardo’s scientific fascinations with his vision of divinity. The latter takes the same biblical characters, but this time the Virgin is sitting on her mother’s lap.

Leonardo’s vivid approach would have riveted contemporary viewers. He brings a new naturalism to a familiar subject, a sense of three-dimensionality, mobility and lively interaction. Michelangelo and Raphael were certainly impressed. A version of the Burlington House Cartoon is known to have been publicly displayed in Florence. Michelangelo saw it and, typically competitive, sought to adapt it. Look at his tondo, now hung beside it, and the similarities become clear. 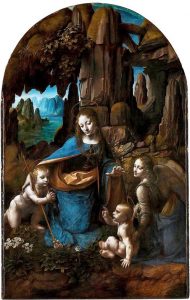 Michelangelo adds a fresh surge of energy to the narrative. Leonardo’s elegantly S-shaped baby now squirms like a fish across his mother’s lap. He seems almost to be trying to wrench himself free as, lunging forward, he glances fearfully back over his shoulder at the goldfinch — a symbol of the Passion — that flutters in his cousin’s clutch. The mood of calm, balanced gravity is dramatically disrupted. Michelangelo adapts Leonardo’s model, infusing it with a heightened emotion instead.

Raphael, who settled in Florence at about that time, realised that with these two masters already established, he needed to up his game. The curators now show what he learnt from Leonardo. His 1505 Ansidei Madonna is possessed of an unprecedented three-dimensionality.

Raphael also looked to Michelangelo. It is known that he made a drawing after the tondo and later adapted it for his beautiful Bridgewater Madonna, which unfortunately cannot be included in this exhibition (you have to visit Edinburgh if you want to see that). But the National Gallery hangs his 1507 Saint Catherine of Alexandria, a direct synthesis, the informative wall texts explain, of Leonardo and Michelangelo. Mastering the naturalistic credibility of the former, revelling in the emotional tensions of the latter, Raphael adds his distinctive touch, softening the starkness of Leonardo and controlling the wilfully unbalanced drama of Michelangelo to offer instead a serenely harmonious confection.

This is exactly the sort of show that the National Gallery should be putting on. Right here, at the heart of our capital, we house one of the world’s greatest art collections. Yet even as special exhibitions are stuffed to bursting, you can step into the Sainsbury Wing and find only a scattering of visitors. This is a show to remind you of the treasures that are freely available. To step in is to stumble on what feels like the private conversation of the most significant — and rivalrous — artistic triumvirate that our world has known. Make the most of your opportunity and turn up.
Leonardo, Michelangelo, Raphael Around 1500
is at the National Gallery, London WC2 until January 28