When the sport of sailing took off in Britain after the Second World War, Eileen Ramsay was on hand to record it in sumptuous photographs that chronicle the early days of both dinghy and offshore racing.

Dubbed the “queen of yachting photography” by her biographer, the former Times sailing correspondent Barry Pickthall, Ramsay produced a remarkable body of work between the 1950s and early 1970s. She photographed everything from small dinghies in Olympic classes to Admiral’s Cup yachts racing at Cowes Week.

Ramsay trained her lens not only on boats but the men who raced them. They included the pioneers of postwar round-the-world racing — men like Sir Francis Chichester, Sir Alec Rose and Sir Robin Knox-Johnston, and the yacht designer Uffa Fox who raced with the Duke of Edinburgh.

Today her images of racing yachts, taken on her trusty Rolleiflex, shine as brightly as they ever did, many of them in full colour. They capture the beauty of the boats of the Fifties and Sixties but also the drama of a big boat racing out at sea.

Ramsay developed a technique of shooting a yacht from as low a position above the water as she could achieve, something since copied by contemporary photographers. On land she would lie flat on a riverbank; on her 28ft launch, Snapdragon, she would bend low over the side of the boat to capture her subject from across the waves. She described her technique as “making pictures rather than taking pictures” and her approach as that of an “impressionist photographer”.

One of her most spectacular images is of the sloop Cervantes racing at Cowes Week in 1967. Ramsay was on hand as the yacht — overpowered by a big gust of wind — lurched to one side with its brilliant red and white spinnaker touching the surface of the Solent with white water all around the hull. 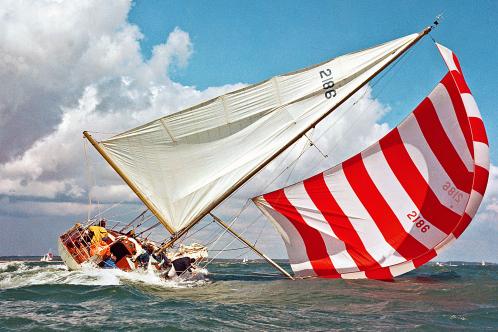 A woman of strong personality who had no qualms about succeeding in the then male-dominated world of sailing, Ramsay was quite happy to speak her mind. She struck up a great friendship with Chichester, chronicling his preparations for the first single-handed transatlantic race and became the only photographer he would allow on his boat, Gipsy Moth III.

“Chichester was a real charmer,” she recalled years later. “He went everywhere with a bottle or two of champagne and was always having parties. I found him very good company.”

Fox was altogether different. Ramsay arrived at his house overlooking Cowes Roads, ready to take his portrait on the terrace, only to find that he had other things on his mind. “He was terrible,” she said. “I don’t remember how many bedrooms there were in that house, but he tried to push me into each and every one of them. In the end I had to tell him very firmly: ‘I am here to take a portrait photograph of you and I think we should get on with it.’ ”

Eileen Dorothy Ramsay was born at Sanderstead in Surrey in 1915, the only child of John Ramsay, an accountant, and his wife, Ethel. She spent much of her early life in Amersham, Buckinghamshire, and went to Chesham Grammar School. It was a happy childhood. She was a keen tennis player and sailed for the first time while acting as a nanny for family friends in Scandinavia. Her photographic career began in 1937 when she was employed as a receptionist by the Reading-based photographer Gilbert Adams. As war approached Adams knew that his services would be required for the war effort but rather than shut his business he gave each of his staff a camera and told them to take some interesting pictures. The one who did best would take over the studio. That turned out to be Ramsay, the complete novice, who then began successfully taking portraits of army officers and their wives.

It was at this time that she met George Spiers, who was working as head technician to the royal photographer Marcus Adams, the father of Gilbert. While walking along the towpath with him at Henley-on-Thames on a glorious summer day, she discovered what good pictorial subjects sailing boats make with the ever-changing light and reflections. Spiers was a Roman Catholic who was already in an unhappy marriage. The pair fell in love and he became her lifelong partner. They set up a studio in Chelsea before moving down to Hamble after the war. There they purchased Snapdragon and bought a boathouse, where they lived.

From her base in Hamble, with Spiers often at the wheel of their boat, Ramsay recorded the postwar explosion in sailing. “We worked well as a team, especially when covering big regattas when a hundred dinghies could shoot past our boat in a matter of minutes,” she said on her 100th birthday.

She covered the Cowes Week regatta every year between 1957 and 1971 and covered the leading dinghy championships, selling her pictures to the sailors and to magazines and newspapers. Chronicling regional regattas around the country, she had to swim for safety on one occasion after the press boat she was on hit a wreck. She quipped that it was not a case of “women and children first” but “cameras first”.

Ramsay photographed many of the great yachtsmen of the day, among them Keith Musto and the two-time Olympic gold medallist Rodney Pattisson. She hung up her cameras in the early Seventies after Spiers was killed in a riding accident. She tried working with other boat drivers and assistants, but decided it was time to move on.

In retirement Ramsay moved away from the coast to the village of Droxford in Hampshire where she indulged her passion for gardening and was active until a great age, while her mind remained as sharp as in her youth. She also enjoyed watercolour painting, choosing flowers as her subjects, and would regularly travel to the Alps to hunt for, and photograph, orchids.

Looking back over her career, she was asked why another woman had not managed to achieve the same prominence in sailing photography as she had. “I don’t know why,” she said. “Don’t let anyone tell you that a woman can’t make her way in business. I always did and I got to places that male photographers would have given their right arm to have been to.”