At some point in the late 1970s or early 1980s, the word design acquired a capital D. Almost at once, everybody seemed to know what it meant. So a chair from John Lewis was obviously designed, but a chair by Ray Eames was Design; a Toshiba radio was designed, but one made by Sony was Design; Adler typewriter, designed, Mario Bellini machine made for Olivetti, Design. And so on.

This distinction infected all consumerdom. Your kettle, toaster, pepper grinder, pen, television, cutlery and hi-fi became signs to the initiated that you could tell designed from Design. They were also signs that you had a lot more money than people who didn’t know the difference. The Gatekeepers of Design went to some lengths to explain why some things were allowed in while others weren’t — tags such as “form following function”, “usability” and “elevating the everyday” (a theme now used in Ikea ads).

The delusion was that if something was well designed for its function, it would necessarily be beautiful; aesthetic values were stealthily imported into engineering ones.

In reality, Design came down to taste. Take the cult Philippe Starck juicer, an egg-shaped alien lander on three elegant legs. It was a terrible squeezer, but it looked beautiful and was a clear signal that you were one of the elect. Starck was one of two patron saints of Design; the other was Sir Terence Conran. And there was one high priest, the mercurial and brilliant Stephen Bayley. Conran made Bayley the head of Britain’s first temple of Design, the Boilerhouse Project at the Victoria and Albert Museum. This morphed into the Design Museum, at Shad Thames, near Tower Bridge, of which he was the first chief executive.

Now, with Bayley long gone, the Design Museum has moved into the old Commonwealth Institute, on Kensington High Street, west London. Built in 1962, this is a giant tent — more correctly, “equilateral and hyperbolic paraboloids in swept shell concrete” — clad in blue and supported by colossal raking concrete shores. It is a long way from Shad Thames, the building there being an ordinary industrial unit; or, as Conran describes the old premises to me, “our wonderful little Bauhausian banana warehouse”.

The museum first toyed with a move to Tate Modern’s site, then with moving back into the V&A. Both had been rejected when the Commonwealth Institute became available. But it was, in 2009, a wreck. “I hadn’t seen it since I was a schoolboy,” says the museum’s current director, Deyan Sudjic, “and what had been the most utopian building in London had become a ruin. There was a lake inside and a smell of decay.” 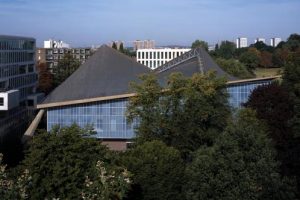 The distinctive roof of the Design Museum, with the adjacent new flats

The building was the last gasp of the Festival of Britain style of optimistic/futuristic modernism. English Heritage had rated it the second most important modern building in London, after the Royal Festival Hall, on the South Bank. Nevertheless, there was talk of knocking it down.

Somehow Sudjic, Kensington and Chelsea council and a property developer came together to preserve it as a museum, the site being made profitable by building three residential blocks with a total of 56 flats. They will be pricy: £4,000 a sq ft is the going rate round there.

The first ambition for the new museum is to bring in the public — the goal is 650,000 visitors a year, compared to 250,000 at Shad Thames. Financing, which includes £17.5m from Conran, is complicated and not quite complete. Sudjic tells me he needs another few million to reach his target of £55m. There will be three exhibitions on at all times: one free permanent show, called Designer Maker User, and two changing paid shows. Ticket sales will be crucial to the new museum’s viability.

There are obvious practical issues. It’s in a difficult location at the wrong end of the High Street, and the new blocks of flats that made the site viable deny the museum a full street frontage. The core problem, however, is that Design may have lost its capital D.

This is exactly what Bayley now believes. Having been its high priest, he has become Design’s prime apostate. “It was a movement, like baroque,” he says. “It had a beginning and an end. I wouldn’t open a design museum now. You see, if everything is now design, then nothing is. It’s like saying everything written is poetry.”

Once the subjective abstraction of taste — that capital D — is removed, the role of a design museum becomes problematic. Clearly, you can no longer simply display products as you would works of art. The most beau­tifully designed objects, such as Apple computers and phones, are now everyday items we can pick up, handle and use. Their beauty is hardly the point, anyway. The real design interest lies in the software and networks that make all such devices work.

In fairness, the Design Museum people are fully aware of this problem; indeed, they are embracing it. “Design,” says the chief curator, Justin McGuirk, “is now at a more fundamental, systemic level, and not just about objects any more. Designers are more aware of where objects are coming from and what they are doing.”

The designer as hero-artist is also being discarded. “The younger generation

has reacted against the old acquisitiveness and possessiveness,” Sudjic says. “Design students would rather call themselves by a group name. For example, the Turner prize [in 2015] was won by a group of architects called Assemble. This is not the Philippe Starck era.”

McGuirk’s first show is a statement of intent. It is called Fear and Love. “Opening a new museum gives us a chance to really think about the meaning of design. I wanted to take the temperature of what it is today. So I’ve invited 11 designers and architects to create installations about design and the present issues of concern.”

The title of the exhibiotion is an echo of the first show at the old Design Museum, called Commerce and Culture. “That was making the point that manufacturing culture was indistinguishable from culture,” McGuirk says. “It was a postmodern point about there being no distinction between high and low — a vacuum cleaner is culture. It was a point we all accepted at the time. Now the public has come a long way to recognising design in our lives, we have become very sensitive to products.” 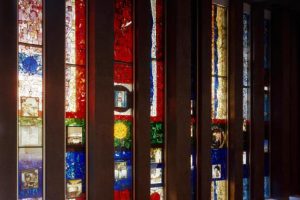 National tonic: inside the Design Museum

Design now includes systems and software, the most important products in the contemporary world. It is, in other words, invisible. Fear and Love also embraces consumer anxieties. Fancy packaging is seen as environmentally threatening; network systems are designed for surveillance and control. The old fetishism of Design is now often seen as faintly ridiculous.

“I find people’s vanity in their homes hilarious,” the designer of the Olympic cauldron, Thomas Heatherwick, told me recently. “They should have the confidence to be ordinary.”

Design, in short, can no longer be finger-wagging, didactic or an aspect of status anxiety. As McGuirk says, it used to be all about “educating people’s taste”. Sudjic speaks of a period when “design was inflicted by someone who knew better”.

The problem for the new museum is obvious: what do you show? The permanent exhibition, Designer Maker User, will be business as usual. That old icon the Vespa scooter will be in there. This is commercially vital, as many visitors will see the place as a superior, officially sanctioned department store. The museum’s shop is out in front, by the entrance walkway.

Every other show, however, will be an attempt to solve the central puzzle. Everything made by humans is designed — nature is too, if you believe in God — and what constitutes good design is contentious: beauty, functionality, environmental virtue or what? So which aspects of the human-fabricated world are to be given museum status? What tests will be applied?

One solution to the puzzle does endure and is still energetically propagated by Conran, now 85. “The Design Museum,” he says, “has the opportunity to be truly taken seriously by government and can demonstrate why design is such an essential part of quality of life in this country.

I think we can also have a huge part to play in revitalising our manufacturing industries and placing design at the heart of that. Can you imagine ‘tech’ without design? At this stage in my life, it really does feel like the most worthwhile thing I have ever been involved with.”

Good design, in this view, is something to which, as a nation, we should aspire, especially now. Conran, unsurprisingly, voted Remain, but says Brexit means “we will need to use our creativity and intelligence to remain competitive. I dare say the team at the Design Museum will have an important say in the future of design and creativity in this country post-Brexit.”

This is the Design Museum as national tonic, a permanent pep talk to the nation. It is the optimistic, modernising tone of the Festival of Britain — and, fair enough, that is the style of its new home.

Will that bring in the public, and, if not, what would? Nobody really knows. But the salvation of the wild and wacky yet touchingly optimistic Commonwealth Institute building is a good thing, as is the appointment of John Pawson as architect of its interior. His austere modernism is a sane counterpoint to the midcentury floridity of those hyperbolic paraboloids.

It is a pity mere money determined that the site had to be used to add to London’s stock of expensive and probably empty flats. The blocks are designed by the Dutch practice OMA, the firm of Rem Koolhaas, but, sadly, from the High Street they look smooth and boringly corporate.

It is best to approach from Holland Park and see the big tent rising amid the greenery. From there it looks like a mad memorial to a braver Britain, to a time when, the war won, we could build a better world, before the puzzlement descended and design lost its capital D.