A landscape drawing is never simply a literal description. It is a construct of the mind and the imagination. Its creator embarks on a quest to tap into an innate essence, to capture some hidden sense of the “soul” of the place. This is what the once-influential poet and critic Geoffrey Grigson declared in his 1949 collection of essays, Places of the Mind, and it is from this publication that the British Museum takes the title of its new show of British watercolour landscapes painted between 1850 and 1950.

Let’s be frank. It is hardly a period to quicken the pulse. The great age of the British watercolour, which began with Paul Sandby’s mid 18th-century topographies and ended with the atmospheric mid 19th-century dramas of late Turner, had passed. So the prospect of poring over endless little countryside pictures that come from an era when the art form is commonly believed to have been on the wane is not particularly exciting. But persist. This show is rewarding if you are prepared to put in the time.

The BM is the repository of our national collection of British works on paper. It conserves about 50,000 examples of the medium, from the most precise Van Dyck pen drawings to some pretty mad-looking scribbles from the present day. And although if you want to look at Victorian watercolours you probably think first of the V&A, the BM nonetheless conserves a rich collection that, given the unfashionability of the subject and the relative cheapness of the works, it has been adding to diligently over the past two decades. This is the collection that the curator, Kim Sloan, has sifted through, folio by folio, selecting about 125 works by 90 artists. 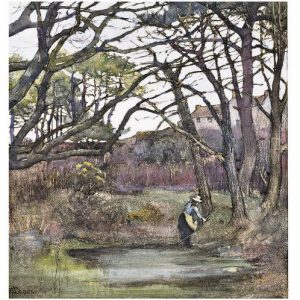 125 works by 90 artists feature in the exhibition. Near Lamorna by Elizabeth Forbes is among them

Most of these pictures will never have been put on show before. And at first glance as you enter the (necessarily) low-lit gallery, you might expect that it will be a bit much of a muchness. Take a few moments to adjust your eyes and your expectations and you will discover that the range and calibre of the work is surprisingly wide.

A show that begins in the high-Victorian era with artists who, influenced by the ubiquitously persuasive John Ruskin, turned to nature, ends with the cubist experiments of Ben Nicholson. You will find pictures by dozens of our best-known artists — including Ruskin, Samuel Palmer, John Sell Cotman, James McNeil Whistler, John Singer Sargent, Paul Nash, Peter Lanyon and Henry Moore — alongside a host of other names, several once extremely famous, but now fallen into obscurity.

There are highly worked, gilt-framed landscapes of the sort that would have hung on the walls of wealthy 19th-century industrialists (they were eager to be reassured that, in spite of rapid urbanisation, the traditional countryside remained intact), wet-on-wet washes creating the vaporous dreams of surrealism, and Graham Sutherland’s rapid sketches of Cornish tin mines. The range of subject, mood and style is vast: Henry Stanier’s exotic architectural record of Karnak (complete with picturesque camel-riding Arabs); John Brett’s meticulous close-up of a wild wayside posy; Lanyon’s sweeping, charcoal-slashed landscapes. 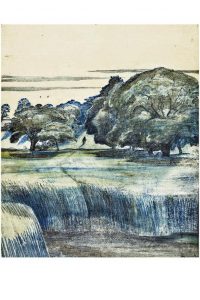 “There is no neat and orderly progress . . . instead we have an array of very diverse and individual artists,” wrote a contemporary scholar of this period, Laurence Binyon. It is no accident that he, like Grigson, was also a poet. This show is less about the progress of modernist movements (although you can trace them) than about how artists, while drawing on tradition, also extended and developed their genre through personal responses.

The thematic hang of the show emphasises this. It looks at the way in which painters made use of the railways (which offered easy access to previously remote regions of Britain) to set up colonies and record their individual experiences. A particularly evocative section examines the impact of conflict from the Crimean War in the 1850s to the aftermath of the Second World War nearly a century later. Here pictures vary from the pathos of Frederic James Shields’s drummer boy dreaming on a battlefield to the watercolours that Nash referred to as “a curious record” of his “psychological state”.

For all that several of the works have been made in the studio, often worked up precisely from careful notes, many more are characterised by that freshness and immediacy that is so often the property of the watercolour as opposed to the more laborious oil. Take your time and you may discover that you tap into this. Our responses to art can become all too easily blunted by the loud, in-your-face aesthetic of the modern-day. Flip through this show searching for something phenomenal and you are sure to come away having found it dull. However, if you ditch preconceptions and embark on a slow, patient process of properly looking you may find a new place opening up in your mind.
Places of the Mind: British Watercolour Landscapes 1850-1950
is at the British Museum (020 7323 8299) to August 27